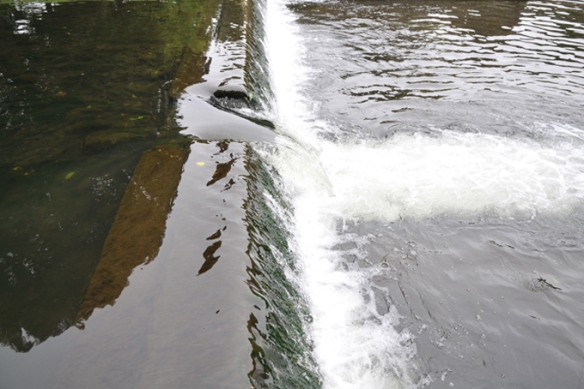 Preparing for a show –‘Phase’, Green on Red gallery, October 11 – the approaching deadline seems to draw everything into its vortex. Work speeds up, energies are spent, thinking becomes strained under the pressure of conclusion. Though the pressure to finish can’t be denied, it’s really only a pretend ending. Perhaps nothing can be made sense of without an end, or at least the sense of an ending.

Gardens back onto the river that runs through the park. The wall of one has an imitation heron guarding over the garden’s ornamental pond. The real heron is only a few feet away. Unimpressed by his imitation, he stands, one legged, on a submerged rock, gently clawing the passing water. I haven’t seen him catch anything yet, but he must do because he has been fishing this stretch of river for months.

Running across the wet grass Frankie crosses the white borderline that separates the pitch from the surrounding area. On one side of the drawn line a set of carefully worked out rules hold sway, on the other side, chaos. Frankie crosses with impunity, without sense of the division he conquers.

Several small weirs control the flow of the river. The largest one is close to the concrete steps leading down from the pathway to the waters edge. If you look into the water just before the drop, the surface appears still, clear, and unmoving. Two feet later it is cascading over the side. The weir’s backwash traps debris in its wake, metal cans and small branches, and footballs turning perpetually, running backwards against the river’s flow.

A framed etching by Dermuid Delargy, ‘The Imminence of Death’ (1988) hangs above our living room couch. The monochrome field is filled with scribbles and blobs, scratches and stains, and with remarkably fluent and confident lines. Several figures punctuate the scene, two stamping horses, a woman turning away, a man lying stricken on the ground. In the bottom right-hand corner another man, naked and with arms outstretched, is facing a charging bull. Though in peril the man’s posture is open – in bravado or fatalism – he is the hero of a moment transfixed.

Images stop time but we cannot. In ‘De brevitate Vitae’ the roman philosopher Seneca reminds us that time is precious. We imagine we have more time to come but we don’t really, there is only the present. We can alleviate anxieties about the brevity of life by remembering to live now. Ludwig Wittgenstein wrote that when greeting each other we should say: “Take your time!” Time should be possessed, not feared. Until recently I imagined Delargy’s hero was extending his arms in an acceptance of his fate, a gesture welcoming his own destruction. But now I think the figure’s gesture is one of defiance. In his out-stretched stance he is attempting to stretch out the present, pushing time sideways to his left and to his right, extending the moment that prefigures death forever.

In another image of resistance, from death as a kind of ecstatic dissolution, ‘The Drunken Boat’, returns, – “the sea has rolled me softly in her sigh” – to the dark pond. Rimbaud’s reverie culminates in exultation, “O Let my keel burst! Give me to the sea!”, but the desire for oblivion lasts for only an instant. The toy boat returns eventually to the boy, and to ordinary life, but carrying a cargo of extraordinary visions, of “Dawn rising like a nation of doves”, of, “Glaciers, silver suns, pearly tides, ember skies!”

The final verse, forlorn, as though worn out from the tumultuous voyage, contains a plea, “If I desire any of the waters of Europe, it’s the pond  black and cold, in the odor of evening, where a child full of sorrow gets down on his knees  to launch a paper boat as frail as a May butterfly.”

Formwork Studio
A physical location and conceptual framework for a range of ideas and practices.

Notebook
A chronicle of thoughts and images 'Phase' 2012